A Solid State Relay (SSR) can also be used as an output stage. Details about that option can be found on the 3-phase page.

Here is a complete set of components for the output PCB, or "triac board": 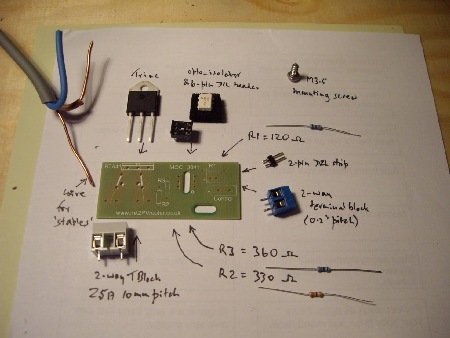 Here is a circuit diagram for this board:

The first stage of the assembly process is to fit a pair of solid copper 'staples' which increase the ability of the board to carry high currents. The recommended cross-sectional area is 1.5 mm², as is generally found for the earth core in 2.5² T&E cable.

The latest batch of these PCBs have some minor improvements but are assembled in a similar way and have identical performance. There are some photos at the end of this page.

For the dual channel PCB shown at the end of this page, the copper 'staples' must be routed differently to allow space for the power connectors. 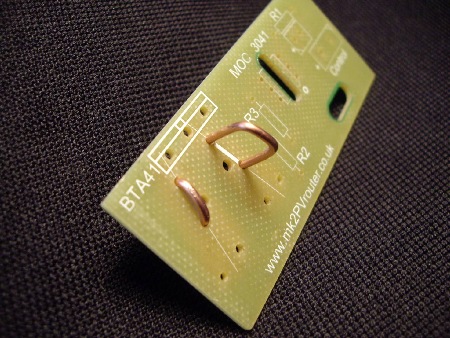 The correct pairs of holes are shown by the thick lines in the silk screen layer.  These holes are approximately 6 mm apart.

First, the wire is bent into a suitable shape for fitting through these holes … 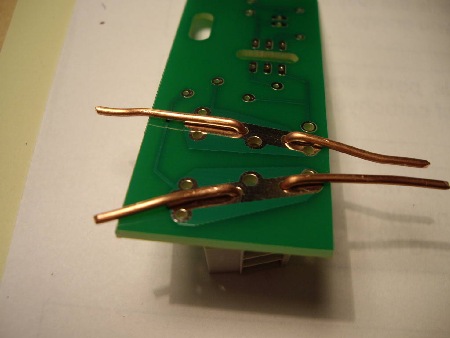 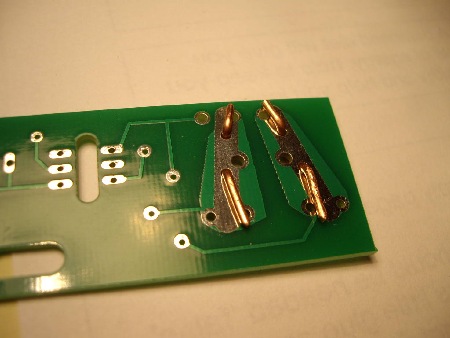 When the wires are in the right position, the four ends can be trimmed to length.

With the copper staples in place, all of the low-power components can now be fitted. As shown on the circuit diagram:

If fitting a DIL header for the opto-isolator or "trigger" IC, the notch should be at the bottom alongside the circle on the PCB. These features both indicate pin 1. 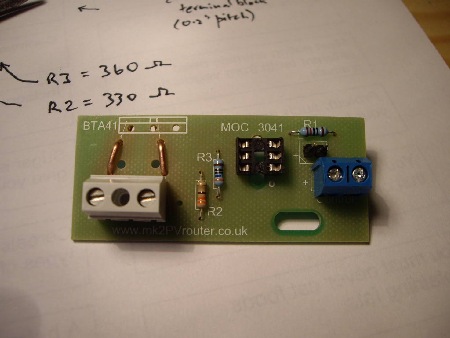 The low voltage pair of wires for controlling the triac can be connected in two ways. The conventional approach is to use a standard screw-terminal block with 0.2" pitch. An alternative approach is to use a 2-pin length of 0.1" pitch SIL pin-strip. By means of a corresponding SIL socket, the control cable can then just be pushed home after everything else is in place. Simple and effective, and no need for any tools.

In the photo above, the large grey connector for the power wiring is shown in its correct position but has not yet been soldered into place. The fitting of this component is described later.

When fitting the small 2-way terminal block for the control cable, care must be taken not to strain the delicate PCB tracks. On one occasion, I found that I had broken one of these tracks as shown in the photo below. 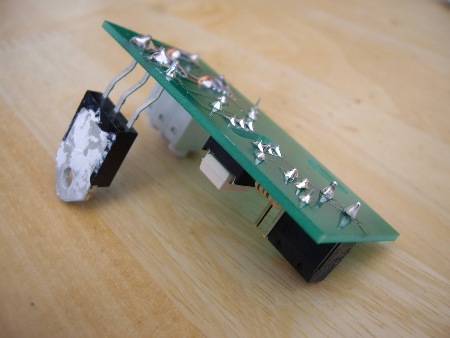 Although not easy to see here, the underside of the damaged track is just visible as a thin brown line under the right-hand pin.

I have most likely twisted the component to achieve proper alignment without fully re-melting the solder. 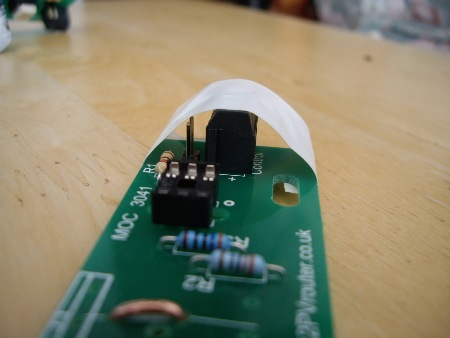 An easy way to get this component aligned correctly is to hold it in place with sticky tape before soldering the pins.

The same technique is useful for attaching the SMA receptacle for the aerial.

For terminating the high-current cables, there are three options: 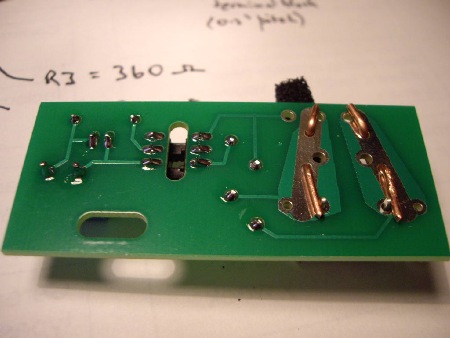 Here, I'm about to fit a 25A connector for the power wiring.

This component can be temporarily held in place by bending the copper staples so that they just nip against the protruding pins.

Then, with a nice hot iron… 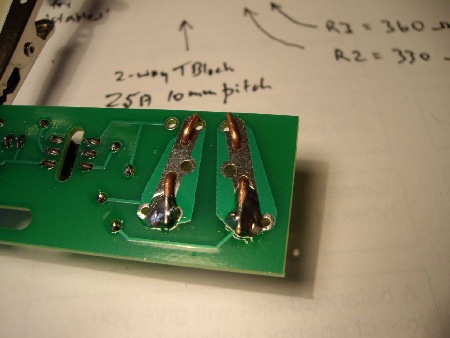 …plenty of solder can be applied.

Before testing an output board, the triac must be added. When building a complete system, it may be best to wait until the triac's mechanical fit to the heatsink has been determined. The triac can then be confidently soldered into place before the output stage is tested. 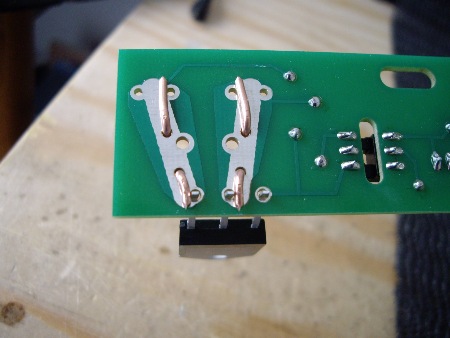 By adjusting the ends of the 'staples', the triac can be held in position quite effectively without need for any solder. 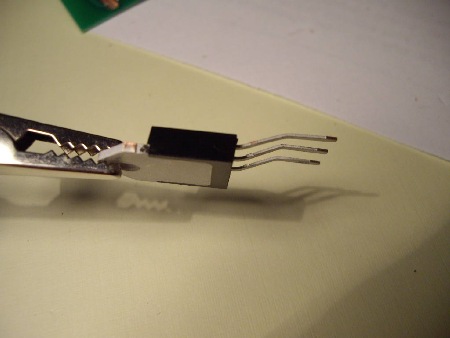 To accommodate the thickness of the enclosure's wall, the triac's leads will need to be offset slightly. 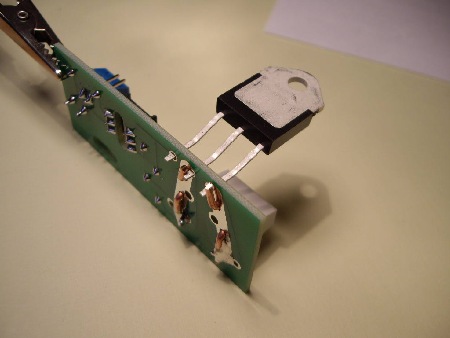 If using the Schneider enclosure and my recommended ABL heatsink mounted as high as it will go, the triac's leads will need to be as long as possible.

By lowering the heatsink slightly, the triac's leads will not need to be quite so long. 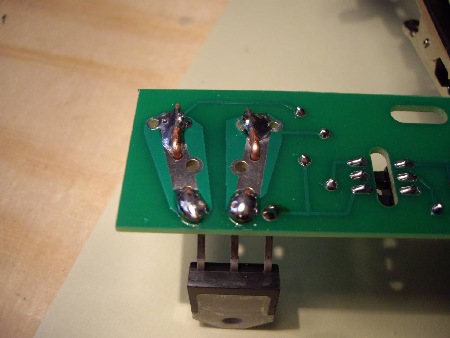 By lightly soldering just the central leg to its staple, any final adjustments can be made…

…then all three legs can be soldered firmly into place.

For the A1 and A2 connections, a good hot iron and plenty of solder are required.

When soldering the centre pin (A2) in place, make sure that the solder does not bulge out towards the gate pin. If it does, some solder should be carefully trimmed away. It appears that I was rather heavy-handed with the solder above.

With the triac firmly in place, the board is nearly ready to be tested. The final stage is to insert the opto-isolator or trigger chip. 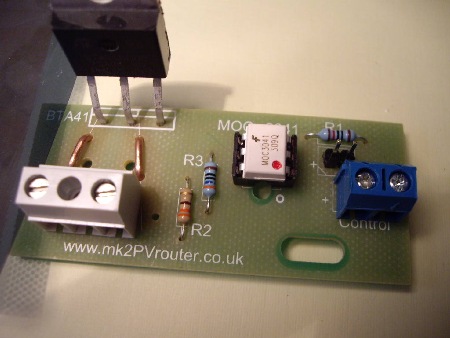 This tiny 6-pin component forms the "bridge" between the low-voltage and high-voltage sides.

The dot on the chip (highlighted here in red) needs to be alongside the circle on the PCB.

If fitted the wrong way round, it won't work. But thanks to the layout of its pins, it should survive the experience.

When building an entire system, it may be more appropriate for the completed output stage to be mounted into the enclosure before being tested. The guidance below is offered for when an output stage is to be tested in isolation.

Safety Warning:
To test that the trigger & triac are working, access to 240V mains voltage is required. Please take great care, and do not undertake this next stage unless you feel confident to do so.

For my own purposes, I have constructed a rig which allows me to test output boards with or without the triac being soldered into place. That rig is shown at the top of the Photo Gallery page. When testing an output board, it is important that the triac forms part of the electrical circuit, otherwise all of the load current will go via the opto-isolator circuit and something will rapidly expire.

With due regard for the above Safety Warning, the simple approach that I've used below should be fine for testing individual boards. Here is a schematic diagram for this operation: 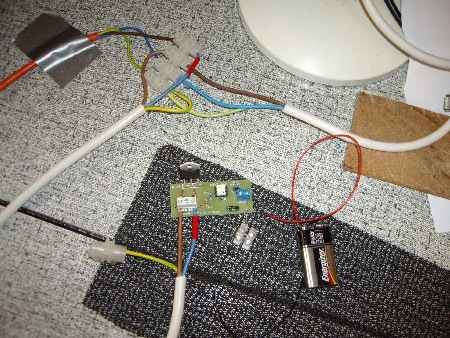 In this test-rig, the (brown) "Line" core from the incoming supply (white cable, top-right) has been routed via the triac.

My test load plugs into a 13A socket on the orange cable just off the picture.

The duck tape is to prevent everything sliding off the table when a test load is plugged in! 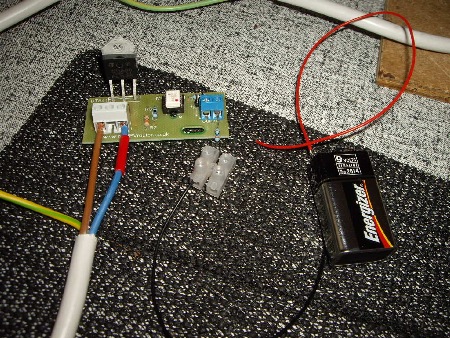 The control circuit needs a series resistor to limit the current. Here, it is on the -ve side, but either side is OK.

To activate the circuit, I just touch the red wire onto the +ve control input at the terminal block.

The triac will be OK for a few seconds without a heatsink.

The latest batch of these boards includes some minor improvements: 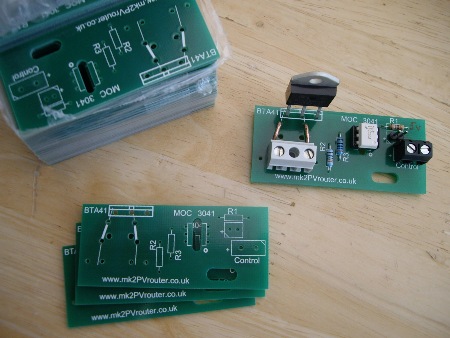 Here, one of the new boards has been assembled for 5V operation.

The solder-resist layer allows the silk-screen image to be seen more clearly. 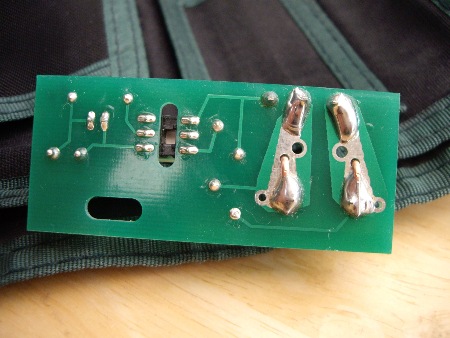 Increased spacing between the triac holes allows greater clearance between the Gate and A2 pads.

A dual version of the output stage PCB is now available. This allows the triacs for two independent loads to share the same heatsink.  This arrangement is suitable for a two-load system where surplus power will not exceed ~3 kW.

The dual version of the output stage PCB has been reworked as shown below.  It now has two layers of copper which makes the tracks more robust. The hole locations for the 1.5 mm² solid copper 'staples' have been adjusted and there is no longer any doubt as to where they should be fitted.

The two circuits are identical electrically and are laid out as mirror-images of each other.

Care must be taken to fit the components in their correct locations.

As shown on the PCB and by the red dots in this photo, IC1 and IC1a are opposite ways around.

NB. With the earlier single-sided version, each 1.5 mm² copper 'staple' should be threaded through the larger of the two holes near the middle of the board. This arangement in shown in the next two photos. Otherwise there may not sufficient clearance for the power connectors. 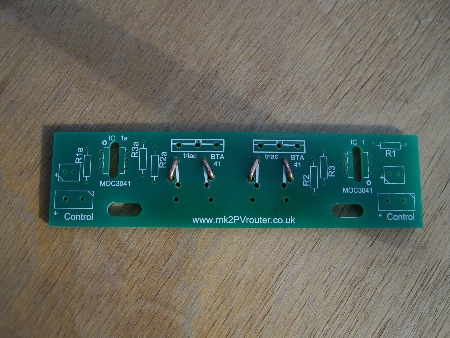 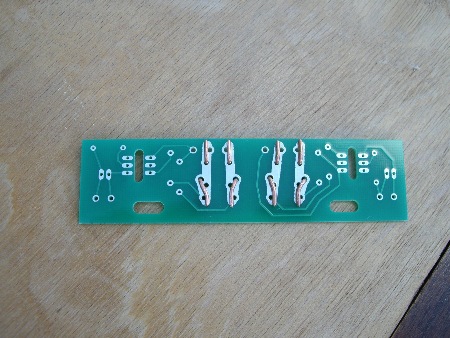 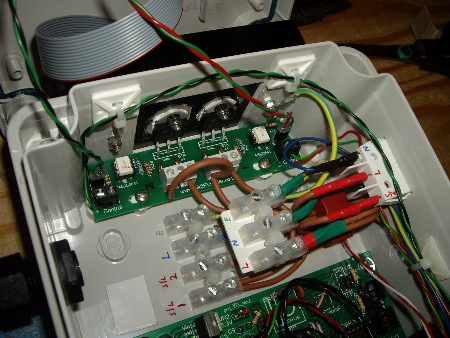 Here, a dual output PCB has been fitted into a standard sized enclosure.

To accommodate the extra power cable, a second connector block has been mounted above the first one.

NB. The element that's next to the Earth on the lower connector should be labelled "N" not "L". 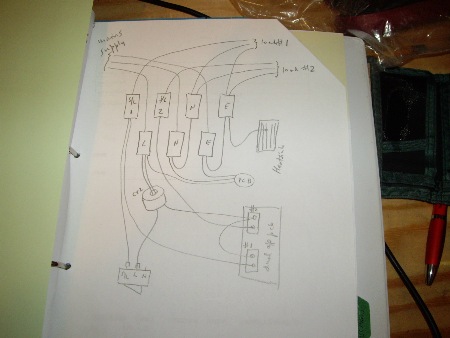 NB. CT2 is now in the Line circuit rather than the Switched-Line.  That's because the YHDC TA17L-04 CT can accommodate two 1.5mm² cables but not three.

Update 2021: Latest versions of the TA17L-04 now have larger apertures so will comfortably fit around three 1.5mm² cables

If two separate output stages are to be used to provide 2 x 3 kW capability, the form of wiring shown below may be suitable.

NB. The connector blocks for the primary L, N & E terminals may need to be larger to accommodate the extra cables.